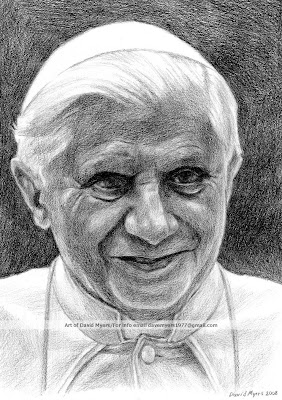 This drawing is in honor of Pope Benedict’s Apostolic Visit to the United States this past week, and was rendered from a photo taken in St. Peter's Square by a good friend. I am very grateful to the Holy Father for his presence and his words, which, as always, were full of beauty, goodness, and hope. I was especially proud of our country and our President for so graciously receiving our Pastor. It was wonderful to see outwardly in his gentle smile the beauty of the Holy Father’s love for Christ and His People. In the past I grieved that the once Joseph Cardinal Ratzinger was so maligned and misunderstood. His writing, to me, always revealed a man deeply in love with God. I remember very well the first time that I read a book he wrote named Called to Communion. It was like drinking clear, cold water, the kind that refreshes and brings you to life. A passage from that book follows, in which then Cardinal Ratzinger reflects on the tension between the Office of the Pope and the sinfulness and weakness of the men who have filled that office throughout history.

Prints of this work are available on Imagekind, and may be ordered by following the link below. Imagekind has a huge array of paper choices, and if you so choose, Imagekind will even frame the work for you according to your specifications. Large prints of my work are usually possible, up to or exceeding 16x20! Please have a look!

“If in the course of history the attribution of such authority to men could repeatedly engender the not entirely unfounded suspicion of human arrogation of power… The men in question are so glaringly, so blatantly unequal to this function that the very empowerment of man to be the rock makes evident how little it is they who sustain the Church but God alone who does so, who does so more in spite of men than through them. …When the Church adheres to these words in faith, she is not being triumphalistic but humbly recognizing in wonder and thanksgiving the victory of God over and through human weakness. Whoever deprives these words of their force for fear of triumphalism or of human usurpation of authority does not proclaim that God is greater but diminishes him, since God demonstrates the power of his love, and thus remains faithful to the law of the history of salvation, precisely in the paradox of human impotence. For with the same realism with which we declare today the sins of the popes and their disproportion to the magnitude of their commission, we must also acknowledge that Peter has repeatedly stood as the rock against ideologies, against the dissolution of the word into the plausibilities of a given time, against subjection to the powers of this world.When we see this in the facts of history, we are not celebrating men but praising the Lord, who does not abandon the Church and who desired to manifest that he is the rock through Peter, the little stumbling stone: "flesh and blood" do not save, but the Lord saves through those who are of flesh and blood. To deny this truth is not a plus of faith, not a plus of humility, but is to shrink from the humility that recognizes God as he is. Therefore the Petrine promise and its historical embodiment in Rome remain at the deepest level an ever-renewed motive for joy: the powers of hell will not prevail against it . . .”

– From Called to Communion by Joseph Cardinal Ratzinger
Posted by ABOUT THE ARTIST: DAVID MYERS at 5:53 AM