SAINT GIANNA BERETTA MOLLA : A WITNESS TO THE PRECIOUS GIFTS OF LIFE AND FAMILY 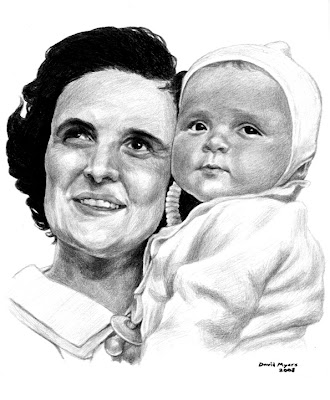 This is a drawing of Saint Gianna Beretta Molla, a Wife, a Mother, a Physician, and a Martyr to the Sanctity of Life. Saint Gianna is one of only a handful of married men and women who have been Canonized Saints by the Church. She is also one of the only (if not the only person) saints whose canonization was attended by her husband and her children. She is a remarkably beautiful witness to the beauty of the vocation of matrimony, and also to the sacred love of a mother.

A Saint, in the Catholic tradition, is understood to be a person who lived their Christian faith with true heroism and radical charity. Saints are canonized by the Church and the Holy Spirit, in a process that has developed across thousands of years. However, the cause of sainthood always begins with the "Sensum Fidei," which is translated "Sense of the Faithful." This is why it was so significant, at John Paul II's funeral, that the people where chanting "Santo Subito! Santo Subito!" in unison at the end of the Mass. Translated this means "Sainthood now!" This, according to the commentators, used to be enough to Canonize someone. In any case, the sensum fidei was very strong at the time of Saint Gianna's death. It cannot be denied that she is a much needed witness for our times, and this in some part explains why she is so universally loved by all who get to know about her life and her death.

Saint Gianna is remembered especially for the way in which she died, and the reason she died. When pregnant with the latest of many children, Saint Gianna was found to have a large tumor, which threatened both her life and that of her unborn child. She had these choices for treatment: 1) The doctors could do a radical hysterectomy, one side effect of which would be an abortion 2)The tumor could be removed surgically in a relatively safe procedure that would also have among its results an abortion, or 3) The doctors could, in a very risky procedure, remove the tumor but suture the wound in such a way as to protect the baby. Saint Gianna chose the third option, and the procedure was done, against the objections of friends and family. It is reported that Saint Gianna told her husband before going into surgery: "If the choice is between me or the baby, you must choose the baby. I demand it." To a friend who protested that her other children needed her, Saint Gianna replied "For my children who have already been born, it is true that I am necessary to them. But to this child, I am ESSENTIAL." Saint Gianna's tumor was removed, but she died shortly after the birth of her baby, due to complications. She was able to hold the child before she went to her eternal award. If this were the only story of her life, it would certainly be remarkable and heroic, but not enough for a cause for canonization. Blessed we are indeed that Saint Gianna was not merely the doer of a heroic deed, she was a hero of faith and prayer throughout her life. If you have made it through this treatise (my apologies) I hope you will also read the following short biography from the Vatican's website. I am also embedding a couple videos about Saint Gianna's life that may be less time consuming.

Saint Gianna is a witness in our times to the responsibility of fathers and mothers to their children and to each other, as she is to the Sanctity of Life. All who come to know her, and who necessarily come to benefit from her courage and charity, fall immediately in love with her. I learned this today as I read about her life. Thank you for your time. During this week, on the eve of the March for Life, we ask Saint Gianna's prayers for us all, that we may find within ourselves the courage and the charity of Christ, to stand against the evils of our times.

Gianna Beretta was born in Magenta (Milan) October 4, 1922. Already as a youth she willingly accepted the gift of faith and the clearly Christian education that she received from her excellent parents. As a result, she experienced life as a marvellous gift from God, had a strong faith in Providence and was convinced of the necessity and effectiveness of prayer.

She diligently dedicated herself to studies during the years of her secondary and university education, while, at the same time, applying her faith through generous apostolic service among the youth of Catholic Action and charitable work among the elderly and needy as a member of the St. Vincent de Paul Society. After earning degrees in Medicine and Surgery from the University of Pavia in 1949, she opened a medical clinic in Mesero (near Magenta) in 1950. She specialized in Pediatrics at the University of Milan in 1952 and there after gave special attention to mothers, babies, the elderly and poor.

While working in the field of medicine-which she considered a “mission” and practiced as such-she increased her generous service to Catholic Action, especially among the “very young” and, at the same time, expressed her joie de vivre and love of creation through skiing and mountaineering. Through her prayers and those of others, she reflected upon her vocation, which she also considered a gift from God. Having chosen the vocation of marriage, she embraced it with complete enthusiasm and wholly dedicated herself “to forming a truly Christian family”.

She became engaged to Pietro Molla and was radiant with joy and happiness during the time of their engagement, for which she thanked and praised the Lord. They were married on September 24, 1955, in the Basilica of St. Martin in Magenta, and she became a happy wife. In November 1956, to her great joy, she became the mother of Pierluigi, in December 1957 of Mariolina; in July 1959 of Laura. With simplicity and equilibrium she harmonized the demands of mother, wife, doctor and her passion for life.

In September 1961 towards the end of the second month of pregnancy, she was touched by suffering and the mystery of pain; she had developed a fibroma in her uterus. Before the required surgical operation, and conscious of the risk that her continued pregnancy brought, she pleaded with the surgeon to save the life of the child she was carrying, and entrusted herself to prayer and Providence. The life was saved, for which she thanked the Lord. She spent the seven months remaining until the birth of the child in incomparable strength of spirit and unrelenting dedication to her tasks as mother and doctor. She worried that the baby in her womb might be born in pain, and she asked God to prevent that.

A few days before the child was due, although trusting as always in Providence, she was ready to give her life in order to save that of her child: “If you must decided between me and the child, do not hesitate: choose the child - I insist on it. Save him”. On the morning of April 21, 1962, Gianna Emanuela was born. Despite all efforts and treatments to save both of them, on the morning of April 28, amid unspeakable pain and after repeated exclamations of “Jesus, I love you. Jesus, I love you», the mother died. She was 39 years old. Her funeral was an occasion of profound grief, faith and prayer. The Servant of God lies in the cemetery of Mesero (4 km from Magenta).

“Conscious immolation», was the phrase used by Pope Paul VI to define the act of Blessed Gianna, remembering her at the Sunday Angelus of September 23, 1973, as: “A young mother from the diocese of Milan, who, to give life to her daughter, sacrificed her own, with conscious immolation”. The Holy Father in these words clearly refers to Christ on Calvary and in the Eucharist.

Gianna was beatified by Pope John Paul II on April 24, 1994, during the international Year of the Family.

Posted by ABOUT THE ARTIST: DAVID MYERS at 7:32 PM