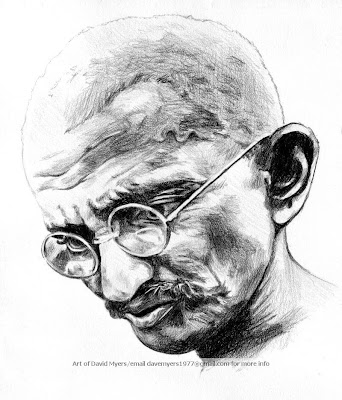 "I found in the nonviolent resistance philosophy of Gandhi... the only morally and practically sound method open to oppressed people in their struggle for freedom." - Dr. Martin Luther King Jr.

This portrait of Gandhi is a companion to my previous drawing of Dietterich Bonhoeffer, and is part of a larger piece commissioned by a friend. Gandhi’s nonviolent resistance to the abuses of the occupying government in his country would inspire great leaders like Bonhoeffer and Dr. Martin Luther King in their efforts to remove oppression and misery by nonviolence. What follows is an excerpt from an article available on Wikipedia:

Mohandas Karamchand Gandhi, (2 October 1869–30 January 1948), also known as Mahatma Gandhi, was a major political and spiritual leader of India and the Indian independence movement. He was the pioneer of Satyagraha—a philosophy that is largely concerned with truth and 'resistance to evil through active, non-violent resistance'—which led India to independence and inspired movements for civil rights and freedom across the world. Gandhi is commonly known in India and across the world as the Mahatma ("Great Soul" - an epithet given by Tagore) and as Bapu ("Father"). In India, he is officially accorded the honour of Father of the Nation. 2 October, his birthday, is commemorated each year as Gandhi Jayanti, a national holiday. On 15 June 2007, the United Nations General Assembly unanimously adopted a resolution declaring 2 October to be the "International Day of Non-Violence."

Gandhi first employed peaceful civil disobedience in the Indian community's struggle for civil rights in South Africa. Upon his return to India from Africa, he organized poor farmers and labourers to protest against oppressive taxation and widespread discrimination. Assuming leadership of the Indian National Congress, Gandhi led nationwide campaigns for the alleviation of poverty, for the liberation of women, for brotherhood amongst different religious and ethnic groups, for an end to untouchability and caste discrimination, and for the economic self-sufficiency of the nation, but above all for Swaraj—the independence of India from foreign domination. Gandhi famously led his nation in the disobedience of the British salt tax imposed in India with the 400 kilometre (250 miles) Dandi Salt March in 1930, and in an open call for the British to Quit India in 1942. He was imprisoned for many years on numerous occasions in both South Africa and India.

Gandhi practised and advocated non-violence and truth in all situations. He lived simply, organizing an ashram that was self-sufficient in its needs. Making his own clothes—the traditional Indian dhoti and shawl, woven with the handspun yarn he spun on a charkha—he lived on a simple vegetarian and, later, fruitarian diet. He underwent long (at times over a month) fasts, for both self-purification and protest.
Posted by ABOUT THE ARTIST: DAVID MYERS at 9:32 AM