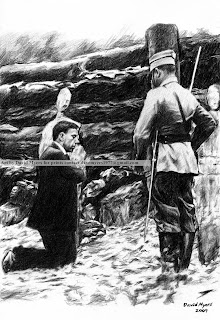 This drawing is a companion to an earlier drawing of the same subject. Blessed Miguel Pro (seen in this image kneeling in prayer before his execution by firing squad) was a martyr for the Catholic Faith in Mexico during the early 1900's. He died in 1927 after very successfully helping faithful Catholics to practice their faith in secret.

At that time in Mexico the government was militantly anti-Catholic, and this anti-Catholicism, which began when Mexico declared independence from Spain, had reached a fever pitch. Father Pro was extremely clever and even humorous in the creative ways that he eluded the authorities and made his way around the towns to say Mass. Apparently he took great enjoyment from sketching new disguises and characters he might play. (dressing like a Priest would get you jail time or worse) When an attempt was made on the life of the Mexican President, the government used this as a pretext to arrest Blessed Miguel Pro and his brother, accusing them of being involved in the plot. This was done despite the fact that the actual perpetrator, who was also captured, vehemently denied their involvement.

Blessed Miguel Pro was executed by firing squad, and his execution was meticulously photographed, including a point blank gunshot by an officer when the firing squad failed to kill this faithful priest. It was thought that the distribution of these photographs would stir up fear and weaken the Catholic rebellion. They had quite the opposite effect. In this image Blessed Miguel is shown at prayer, clutching a crucifix in one hand and a Rosary in the other. When he stood to be executed, he lifted his arms in the shape of a cross (see earlier drawing) and prayed "May God forgive you, as I do. Viva Christo Rey!" (Long Live Christ the King)
Posted by ABOUT THE ARTIST: DAVID MYERS at 12:00 AM