FOR THE BEST OF FATHER IN LAWS 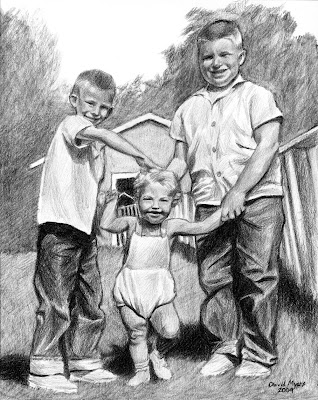 This drawing is a gift for my Father-in-law, in gratitude for his constant generosity to Emily and I in every way possible. I have a deep respect for Ron. He's a man who seems to have the tools for just about any problem you might come across, and he has been a moral compass for my wife throughout her life, and has by extension become an example to me of what it means to live a life that is committed to doing what is right. I would put him in the same category as my grandfather in that regard. When Ron shakes your hand and tells you what he is going to do, you don't have to guess whether or not he'll do what he says. He is one of the hardest workers I have ever known personally, and his daughter is second only to him in that regard. What I love most about my father-in-law though is the same quality that I admire most in my sister Karen: He's as tough as iron, but there are certain subjects (his daughter being one) that he keeps a very soft place in his heart for. I've never seen a man so stoic, who at the same time can be so quickly brought to tears by a conversation about his daughter, or other members of his family. I am very blessed to have Ron as a friend and as a father-in-law, and will always be indebted to him for his generosity and his desire to help anyone who is experiencing any kind of difficulty. I have come to learn that this is a guiding principle of Ron's life, and hope that I can one day live the way he does.

When I was trying to think of what Ron would enjoy seeing in a drawing, I thought of the usual things, NASCAR, Oklahoma, Chevy Trucks, hunting, etc. but then remembered that the one thing most precious to Ron is his family, both immediate and extended, and I remembered this little photo on the mantle in his home. It shows a very young Ron Nimmo (on the left) standing with his baby sister Cathy and his brother Joe. Joe is and was a tank. From what I have heard, "Ron would start fights.... Joe finished them." To be fair, Ron usually didn't need the back up, but Joe was apparently always ready to assist at need. :) I love the picture and hope the drawing will be special for Ron, for his folks, and for his brother and sister.
Posted by ABOUT THE ARTIST: DAVID MYERS at 9:59 AM