Work in Progress: The Pelican, Symbol of Christ 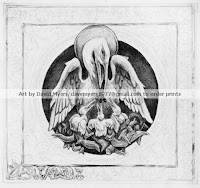 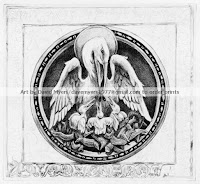 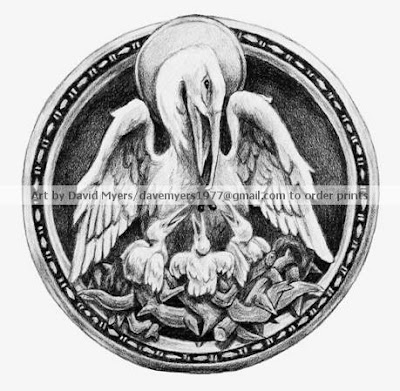 I am very honored to be working to complete the image you see above for another Priestly Ordination. I am very happy to have been contacted and commissioned by so many men studying for the Priesthood. I feel that this is an opportunity for my work to be a true Apostolate, and am overjoyed to have the chance to compose purely religious imagery for such holy occasions. If you have friends who are approaching ordination, please encourage them to visit my site and to see if they would like to have original work done for this solemn day in their life and the life of the Church.
If you are unfamiliar with the image, it is especially dear to the Deacon who commissioned the work, and it will appear on his chasuble at his first Mass of Thanksgiving. It is a traditional image meant to symbolize Christ which dates back to the Middle Ages. It is taken from an erroneous belief that Pelican mothers nursing their young, when stranded in the wilderness, would pierce their own breasts to feed the chicks with their own blood. An explanation of the iconography taken from the Catholic Encyclopedia follows below:

The Pelican is a symbol of the atonement and the Redeemer. It was supposed to wound itself in order to feed its young with its blood and to bring to life those who were dead -- the "pelicane who stricketh blood out of its owne bodye to do others good" (Lyly, Euphues). Allusion is made to this belief in "Hamlet" (act iv): --
To his good friend thus wide I'll ope my arms And, like the kind, life-rendering pelican, Repast them with my blood.Therefore it was deemed a fitting symbol of the Saviour, the nostro pelicano of Dante, Who shed His blood in order to give eternal life to the children of men. Skelton in his "Armorie of Birds" says: --
Then sayd the Pellycan: When my Byrdts be slayne With my bloude I them revyve. Scripture doth record The same dyd our Lord And rose from deth to lyve.
Posted by ABOUT THE ARTIST: DAVID MYERS at 4:33 PM