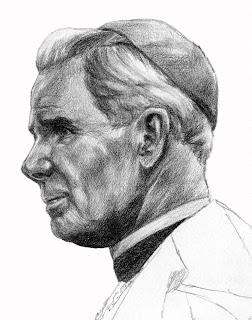 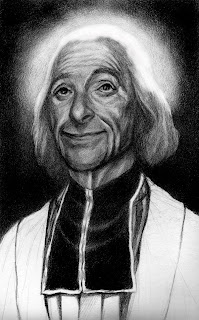 These two drawings, both in their beginning stages, are intended for The Year of the Priest - my vision is to have the full image of these great priests of the Church, Archbishop Fulton Sheen (his cause for beatification is underway) and Saint John Vianney (Patron Saint of all priests) in the lower corner of two larger posters, with a quote (on the priesthood) from the person depicted taking up a larger part of the poster.

This is the very beginning of a drawing I am doing of Archbishop Fulton Sheen for the Year of the Priest. My plan is to draw portraits of great Catholic Priests, not necessarily all confirmed saints, but Priest's Priests. Archbishop Sheen is such a figure. Frankly, he is the definition of the saying "They don't make 'em like that anymore."

Archbishop Sheen is the total package - his writings are beautiful, filled with meditations on the Christian life and Christ Himself that reveal a life spent in prayer. His writings and his teachings, shared by radio and television, are still profound and illuminating insights into Theology, Philosophy, Psychology, Poetry, Art, Music, Politics, and all aspects of human culture. Most significant to me are his insights into the Gospel, revealed in his masterpiece, "The Life of Christ." The Church cherishes his memory for these reasons as well as the example of Priestly heroism that his life constantly bore witness to. His cause for canonization is underway and I for one pray for it, if for no other reason than that more people might be exposed to his wisdom, humor, and desire to help each of us live lives of true goodness.

Archbishop Sheen is famous in the world and the Church for his celebrated Television Series "Life is Worth Living." Ed Sullivan, when he came to the halfway mark of his show, would always welcome the viewers who had just finished watching Bishop Sheen's program. Imagine! A Bishop of the Catholic Church with a television show so popular it rivaled "The Late Show" of its time. I hope you will take a moment to experience a sample of Archbishop Sheen's show. He is a very rare example of a man whose speech is as brilliant and gripping as his writing, and/or vice versa. A true orator. Here is a great clip from a 1957 episode of "Life is Worth Living." It is a good example of how seamless Bishop Sheen's transitions were as he moved from tenderness and humor to serious discourse and even righteous anger when appropriate. Profundity like this is rare today.

He tells a good story at the beginning of the show about a letter from the mother of one of his younger viewers:

This is very early (and highly edited) progress on a drawing of Saint John Vianney that I decided to do as part of a series for "The Year of the Priest."

I wanted to do this drawing in part because I LOVE Saint John Vianney, but also because there really aren't that many representations of the Saint, and the best ones are not in paint or even naturalistic images, but stained glass. The paintings that probably hit closest to the mark portray this Patron Saint of Priests as very somber and grim, but his words, recorded in most cases by others, paint a picture of a man caught up in the Joy of God. This is what I wanted to portray in my work - I hope that it will be well received, but I confess it has frustrated me more than a little while working on it - let me know what you think - sometimes the artist is too close to really see the work.

Given the shortage of (good) images of Saint John Vianney, I searched for photos and/or persons who seem to resemble existing depictions of the Cure of Ars, but who also have expressions of joy and or mirth. Saint John Vianney was famous for saying "If we knew how much God loves us, we would die from sheer joy."

I found, I think the perfect countenance to work from. I used an actor in this case, as I did with my recent drawing of Saint Michael. David Kelly was in the great Irish Comedy, "Waking Ned Devine," and there is a beautiful scene where his character, Michael O'Sullivan, is hearing his dearest friend express his great regard for him. He looks up at him with a beautiful expression of calm joy, tears just welling in his eyes. Its a wonderful scene. I wanted to capture some of the Joy of Saint John Vianney in the way that Michael O'Sullivan's joy was captured by the director and actors of Waking Ned Devine. Hopefully, it is an expression of joy inspired by the knowledge of how much one is loved.
Posted by ABOUT THE ARTIST: DAVID MYERS at 9:37 AM