A HEROIC CONVERT: THE LATE CARDINAL LUSTIGER, ARCHBISHOP OF PARIS 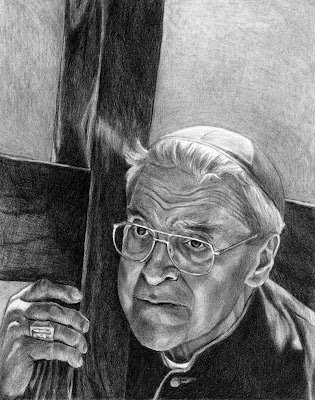 This drawing is a gift for the Papal Nuncio in Washington that was commissioned by a friend of mine. I included with the image a version of the recently completed 2nd "Year of the Priest" drawing (posted below) which I translated into Italian using the Pope's address where the special year was announced. (www.vatican.va has most of the Pope's messages and writings in all the major languages of the world, and I believe it was presented in Italian) I am hopeful that the Nuncio, if he feels it is appropriate, might share that image with the Pope! (I can dream can't I?) I also sent some prayer cards made from drawings I have done in the past.

The late Cardinal Lustiger, who is here portrayed, was a very dear friend of the Papal Nuncio to the United States, Archbishop Pietro Sambi. Lustiger was a Jewish convert to Christianity and became the only Jewish convert in modern times to become a bishop in the Catholic Church. He was archbishop of Paris for many years before retiring in the early 1980s and was made a Cardinal by John Paul II in 1983. When I say he is known as the only Jewish convert in modern times to have become a bishop I believe what is actually meant is that not since Peter and the other Apostles has there been a Jewish convert to Catholicism who has been consecrated Bishop. I may be wrong - you Catholic P.I.'s out there can correct me ;)

What IS certain is that for his faith in Christ Cardinal Lustiger sacrificed much, being disowned by his family and many of the Jewish people. On top of this he experienced distrust from many of his Christian brethren because of his Jewish origins. He isn't shown carrying the cross because of this, but his life certainly fulfilled Jesus' words ''he who would my disciple be, let him take up his cross and follow Me.'' Indeed, by suffering through these things, the Cardinal became a great force of ecumenism between the Jewish and Catholic faiths.

He is carrying the cross in the drawing because the photograph I worked from shows the Cardinal taking part in a ''way of the cross'' procession in which several different people take turns carrying the cross from station to station in a meditation on Christ's sacrifice for all of us. In the original photo you can see others helping him with the burden. This image was chosen to work from because it was one of the Papal Nuncio's favorite images of his old friend, whom it is clear he loved very much. Pray that God will bless this image to be a reminder to the Archbishop of his great friend. Theirs seems to have been a shining example of Christian fraternity and charity.
Posted by ABOUT THE ARTIST: DAVID MYERS at 4:07 AM