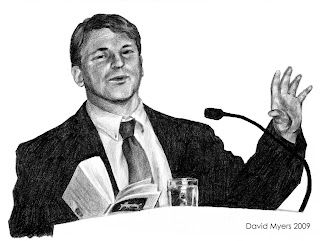 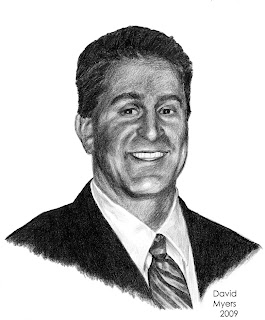 These latest drawings are the last of the portraits I have been assembling of the principal speakers who will be presenting this February at the Ignited by Truth Catholic Conference in Raleigh, NC. Joseph Pearce and Tim Staples are very interesting individuals, especially with regard to their conversion stories. I hope you will have a moment to read a little about them below:
JOSEPH PEARCE
Joseph Pearce is a celebrated and prolific author, having written biographies of literary figures such as G.K. Chesterton, J.R.R. Tolkien, Oscar Wilde, and C.S. Lewis. Pearce is a professor of literature at Ave Maria University, and his conversion story is remarkable. Pearce confesses that when he was younger he was a “fanatical” neo-fascist, and even edited literature for a group promoting this agenda. Pearce attributes his conversion to Christianity to the works of G.K. Chesterton, and he writes that his “racism stemmed from hatred, and that his conversion to Christian belief completely changed his outlook.” Eventually Pearce became a Catholic, and now continues to add to his already impressive body of written works.
To me, the most interesting of the titles he has produced is one of his latest books, and I cannot wait to read it. The Quest for Shakespeare: The Bard of Avon and the Church of Rome has as its theme something I have been tempted to believe since becoming Catholic and subsequently re-experiencing the plays of Shakespeare. It seems clear that plays such as “Henry V,” “Hamlet,” and others have embedded within them a very rich and unmistakably Catholic understanding of the world. Whether this was a post-protestant hangover from the post-Anglican reform, or Shakespeare was secretly Catholic is the question posed by Pearce’s latest book.
“O God of battles! steel my soldiers' hearts;
Possess them not with fear; take from them now
The sense of reckoning, if the opposed numbers
Pluck their hearts from them. Not to-day, O Lord,
O, not to-day, think not upon the fault
My father made in compassing the crown!
I Richard's body have interred anew;
And on it have bestow'd more contrite tears
Than from it issued forced drops of blood:
Five hundred poor I have in yearly pay,
Who twice a-day their wither'd hands hold up
Toward heaven, to pardon blood; and I have built
Two chantries, where the sad and solemn priests
Sing still for Richard's soul. More will I do;
Though all that I can do is nothing worth,
Since that my penitence comes after all,
Imploring pardon.”
- From Henry V
Some of the many books the author has written:
• The Quest for Shakespeare: The Bard of Avon and the Church of Rome
• Flowers of Heaven: One Thousand Years of Christian Verse (editor)
• Literary Giants, Literary Catholics
• Tolkien: Man and Myth
• Old Thunder: A Life of Hilaire Belloc
• Literary Converts
• Tolkien: A Celebration
• C.S. Lewis and the Catholic Church
• Wisdom and Innocence: A Life of G. K. Chesterton
• The Unmasking of Oscar Wilde
TIM STAPLES
Tim Staples is a dynamic speaker and a convert to Catholicism. If he looks like a tough guy, its probably because he’s a former Marine. It was in the Marines that Staples experienced his conversion through the friendship of a fellow soldier who was deeply devoted to his own faith. You can read more about Tim and his work as a Catholic Apologist at Catholic Answers, an excellent resource for anyone who has questions regarding what things Catholics believe and why they believe them. I have enjoyed the talks that I have heard Mr. Staples give, and look forward to seeing him this year at Ignited by Truth.
Posted by ABOUT THE ARTIST: DAVID MYERS at 5:57 AM