BLESSED PIER GIORGIO FRASSATI : THE MAN OF THE BEATITUDES 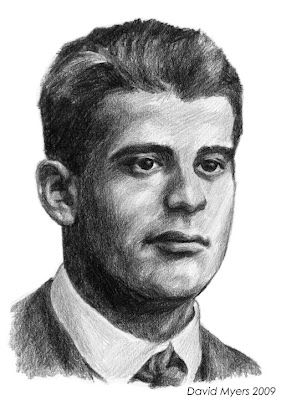 I hope that you will like this portrait of Blessed Pier Giorgio Frassati, a personal hero of mine and of countless others. I was first introduced to Blessed Pier Giorgio by my good friend Brad Watkins, who founded a Frassati Society at the local Catholic High School in Raleigh, Cardinal Gibbons. What struck Brad and many others about this young man who died at the age of 24, is that he proves, as John Paul II said of him, that "holiness is possible for everyone."

Blessed Pier Giorgio was, as you might expect, a radically prayerful and devoted Christian soul. But he doesn't fit the profiles of the great saints across the ages. He wasn't poor. He was wealthy. He wasn't weak or underfed. He was an athlete who was full of strength. He was not a drag. He was a practical joker and a rascal. He was different from his friends. However they did not hold this against him. On the contrary they loved him for it. He was not brought up in a home that encouraged his Christian aspirations. Yet he fought with valor in order to live them out. Although he was rich, he found his home among the poor. Indeed, he cared for them in ways that no one else knew until his death.

Pier Giorgio died suddenly, due to polio contracted during his frequent visits to the families he cared for. Pier Giorgio gave food, he (a rich son of an aristocratic family) begged for money, he bought medicine, and he sacrificed unceasingly to give to those who had nothing, but also to bring them to Christ. Blessed Pier Giorgio came to a home where a woman lived whose husband had been sent to prison. He saw her baby and asked if the child had been baptized. The mother said that the baby had not been, because she did not have the money for the baptismal garment. Blessed Pier Giorgio paid for the garment, attended the baptism, and became the Godfather of the child. When the husband was released from prison, Blessed Pier Giorgio was waiting for him at the gates, and immediately took the man to a factory where he knew he could be hired and begin work.

This was a great, holy, loving man. He was also handsome, athletic, and virile. He was all that our society glories in, yet he counted it, with his favorite Saint, the Apostle Paul, "so much rubbish, that [he might] gain Christ." (Phillipians 3:8) Imagine a cross between Brad Pitt, Bear Grylls, and Saint Francis of Assisi, and you've just imagined Blessed Pier Giorgio Frassati. When he died people his family did not even know he had been ministering to filled the streets by the hundreds. On his deathbed Pier Giorgio gave to his sister lists of the people he needed to follow up with, to supply medicine, food, and the like. John Paul II called Blessed Pier Giorgio "The Man of the Beatitudes," and championed him as a great beacon for Christian youth. I hope that you will enjoy the following short film about his life:

Posted by ABOUT THE ARTIST: DAVID MYERS at 6:07 PM