DIETTRICH BONHOEFFER AND THE COST OF DISCIPLESHIP 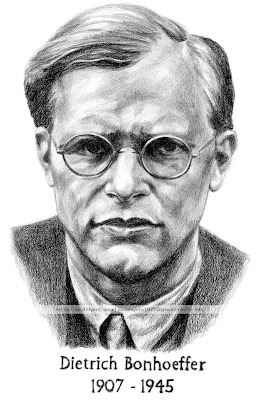 This portrait is part of a larger project, but I am displaying it now because it stands on its own as a memorial to a man that I would not hesitate to call a great theologian and saint. Dietrich Bonhoeffer was a Lutheran Pastor and Theologian at the time of the rise of Nazism in Germany. As a very good article in Wikipedia recalls: “During World War II, Bonhoeffer played a key leadership role in the Confessing Church, which opposed the anti-semitic policies of Adolf Hitler. He was among those who called for wider church resistance to Hitler's treatment of the Jews. While the Confessing Church was not large, it represented a major source of Christian opposition to the Nazi government in Germany. After the unsuccessful July 20 Plot in 1944, Bonhoeffer's connections with the conspirators were discovered. He was moved to a series of prisons and concentration camps ending at Flossenbürg,” where he was killed by hanging** at Hitler’s command, very near to the time of the Allies’ entry into the area where he was held prisoner.

My favorite work by Bonhoeffer is admired deeply by Christians of every denomination, and it is called The Cost of Discipleship. In this book, Bonhoeffer famously makes a distinction between what he calls “cheap” vs. “costly” grace. More from Wikipedia follows:

“But what is "cheap" grace? In Bonhoeffer's words: "cheap grace is the preaching of forgiveness without requiring repentance, baptism without church discipline. Communion without confession. Cheap grace is grace without discipleship, grace without the cross, grace without Jesus Christ." Or, to put it even more clearly, it is to hear the gospel preached as follows: "Of course you have sinned, but now everything is forgiven, so you can stay as you are and enjoy the consolations of forgiveness." The main defect of such a proclamation is that it contains no demand for discipleship.

In contrast to this is costly grace: "costly grace confronts us as a gracious call to follow Jesus, it comes as a word of forgiveness to the broken spirit and the contrite heart. It is costly because it compels a man to submit to the yoke of Christ and follow him; it is grace because Jesus says: "My yoke is easy and my burden is light."”

You can read more about Bonhoeffer’s life and work at http://en.wikipedia.org/wiki/Dietrich_Bonhoeffer

(**Please note that this is a correction to an earlier edition of this post - I mistakenly wrote that the subject died by firing squad. Thank you for your patience and for the correction sent to me by an interested person**)

Posted by ABOUT THE ARTIST: DAVID MYERS at 6:54 AM