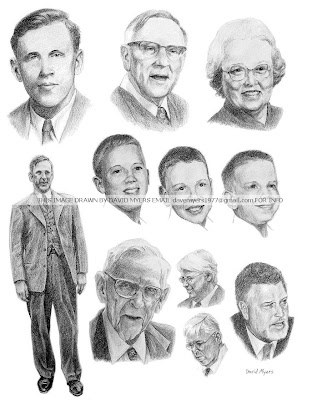 This drawing is a tribute to the memory and legacy of my grandfather, Albert Myers, a man whose greatest achievement was the virtuous life he lived. "Pa pa," as he was affectionately known by us, his grandchildren, was a true patriarch(in the best sense of the word) to his family, a great teacher to his students, and a passionate churchman. As a boy, I once wrote a short paper (in 6th grade) entitled "The smartest man I've ever known" about my Pa Pa. I hope you will enjoy this new testimony to his greatness.

At his funeral, there was not one sermon, but two, and the line leading to the visitation was four wide and out the door. He was truly revered. Look to this post again to listen to one of the sermons about my grandfather - I am in the midst of editing a short movie of pictures set to it.

As you can see, the image illustrates my grandfather at different stages of his life, and shows his wife, my "Pa Ma" next to him, with his boys, one being my father, below as children and as the men he was so proud to see them become. As he approached his failing years, their care for him was truly edifying. I was led to think of my Grandfather and his boys when I heared the following scripture on Holy Family Sunday:

"God sets a father in honor over his children;a mother’s authority he confirms over her sons.Whoever honors his father atones for sins,and preserves himself from them.When he prays, he is heard;he stores up riches who reveres his mother.Whoever honors his father is gladdened by children,and, when he prays, is heard.Whoever reveres his father will live a long life;he who obeys his father brings comfort to his mother.My son, take care of your father when he is old;grieve him not as long as he lives.Even if his mind fail, be considerate of him;revile him not all the days of his life;kindness to a father will not be forgotten,firmly planted against the debt of your sins—a house raised in justice to you." -Sirach 3: 2-6, 12-14
Posted by ABOUT THE ARTIST: DAVID MYERS at 6:59 AM