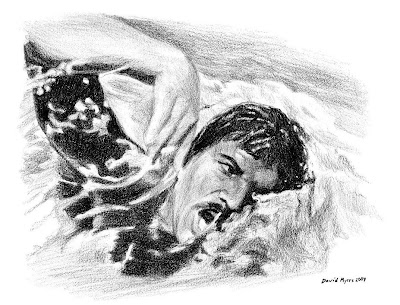 No cap. No goggles. No shaving. Just guts, speed, and one big mustache. Oh, and don't forget 10 Olympic gold medals: 7 of them at the same Olympics, a feat yet unmatched by any athlete. Mark Spitz, the latest addition to the "Legends of Swimming" project, was the ablest swimmer of his time, and a true inspiration. Although Michael Phelps might have something to say about Spitz's record 7 golds in one Olympics come 2008, I wonder if he will also set 7 World records, the way Spitz did at the Munich games? He seems poised to do so, but his greatest hindrance may be competing against himself! Still, there is something really super tough about a guy who swam faster than anyone else of his day, and whose times even still are staggering! He swam pretty much the same events that Phelps swam in the 2004 Olympics, and was only behind the phenom by about 3 seconds in the 100 and 200 meter butterfly! He did that without cap, goggles, or a decent shave, not to mention training at higher altitudes and all of the technology that gets pumped into Olympic superstars today! But Spitz, cocky as he was, would just shrug that off, and is quoted as saying "Goggles were not allowed. A cap was allowed, but I chose not to wear one. I grew the mustache because a coach in college said I couldn't grow one."

Yep. True legend. Enjoy watching how he did the unthinkable at the 1972 Olympic Games in Munich:

Posted by ABOUT THE ARTIST: DAVID MYERS at 11:22 AM