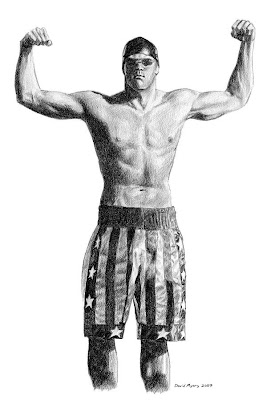 That's right, folks. Love him, hate him, you just can't ignore him! The latest installation in my "Legends of Swimming" project is Gary Hall Jr, my favorite sprinter. Sure he's flamboyant, but you're allowed to be if you can back it up. Gary Hall was especially important to me back in 2000 when he swam with others at the Sydney games for the U.S. - At the time I was recovering from cancer, after one last major surgery. When I watched them swim, it gave me the courage to get back in the water and try some heavier exercise after being afraid for so long to do anything (what with chemotherapy side effects, lowered immune system,etc). It was one of the greatest feelings when I swam that first lap, and I will never forget it.

Yep, Gary Jr is a clown, a showboater, and in 2004 at the Olympic games in Athens, he was the fastest man alive. But he also helped a kid that had been sick for a while get back in the water. I hope you will enjoy this footage of his Olympic win in Athens:

Posted by ABOUT THE ARTIST: DAVID MYERS at 9:23 AM