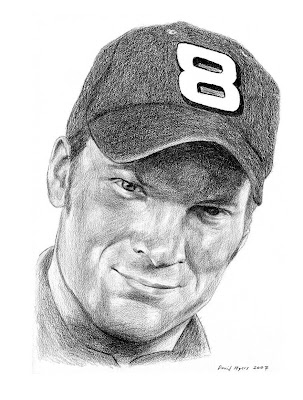 This drawing is my latest homage to NASCAR, specifically the person of Dale Jr. You may or may not remember the small pen and ink drawing I did one year ago to thank my in-laws for their generous invitation to the Bristol 500. Easily the most exciting race of the year, Bristol draws quite a crowd. This drawing (which I am very pleased with, especially considering its size, 5x7) is my act of gratitude for the continued generosity of my wife's family, specifically her father, mother, her aunt and uncle. We spent the weekend at her uncle's family cabin, in the mountains around Boone, NC, and Friday and Saturday drove (with her brother) into Bristol for the Food City 250 and the Sharpie 500. This year was especially fun because I had a radio with which I could eavesdrop on conversations between the drivers and their pit crews. I didn't realize just how much fun racing could be. Dale Earnheardt Jr. is our favorite (as you can see), and he drives pretty quiet - but the few times he had something to say, it was always funny and gutsy. At one point, Jeff Gordon (#24) was running second to the leader, with Junior behind him in third, and Junior's crew chief told him "Now be careful here. 24 is going to want to lead." Junior came back: "Well I'm gonna be lookin' to lead too!" The chief just responded with "I figured as much." He finished in the top 5, and it was sure fun as anything to watch him drive.
Unfortunately, he will have to let go of his #8, as he moves to another racing company. For those who don't understand why that is important, imagine Michael Jordan giving up #23.

Posted by ABOUT THE ARTIST: DAVID MYERS at 6:37 PM