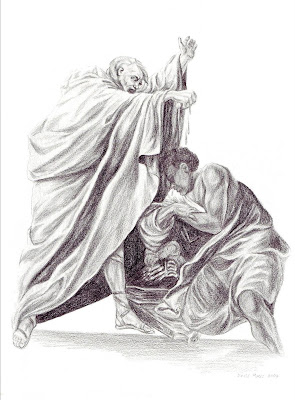 Another friend, one of my dearest - is being ordained in the coming week. This drawing is for him on the eve of his ordination to the Priesthood of Jesus Christ. The image is taken from the story of Philip and the Ethiopian Eunuch(passage follows below) from the Acts of the Apostles. I am making prayer cards for my friend, and he hoped that this passage might be illustrated. Evidently this story holds a very intimate significance for him in his journey towards his vocation.
As I prayed over the passage myself, the title of this entry struck me as especially poignant. Perhaps my friend, who has the greatest devotion to the sacred scriptures of anyone that I have ever known, once needed a guide to unlock the scriptures for him. Whoever that guide was, I know that he planted in my friend a deep and abiding passion for Christ and His Church, and has given a gift to us all. Ultimately, as the passage below tells us, that person was led by another hand, and my very dear friend (who has always been a "guide" to me) is in the end - a gift of the Holy Spirit to God's Church.
Acts 8:26-40
26 But an angel of the Lord said to Philip, "Rise and go toward the south to the road that goes down from Jerusalem to Gaza." This is a desert road. 27 And he rose and went. And behold, an Ethiopian, a eunuch, a minister of the Can'dace, queen of the Ethiopians, in charge of all her treasure, had come to Jerusalem to worship 28 and was returning; seated in his chariot, he was reading the prophet Isaiah. 29 And the Spirit said to Philip, "Go up and join this chariot." 30 So Philip ran to him, and heard him reading Isaiah the prophet, and asked, "Do you understand what you are reading?" 31 And he said, "How can I, unless some one guides me?" And he invited Philip to come up and sit with him. 32 Now the passage of the scripture which he was reading was this: "As a sheep led to the slaughter or a lamb before its shearer is dumb, so he opens not his mouth. 33 In his humiliation justice was denied him. Who can describe his generation? For his life is taken up from the earth." 34 And the eunuch said to Philip, "About whom, pray, does the prophet say this, about himself or about some one else?" 35 Then Philip opened his mouth, and beginning with this scripture he told him the good news of Jesus. 36 And as they went along the road they came to some water, and the eunuch said, "See, here is water! What is to prevent my being baptized?" 38 And he commanded the chariot to stop, and they both went down into the water, Philip and the eunuch, and he baptized him. 39 And when they came up out of the water, the Spirit of the Lord caught up Philip; and the eunuch saw him no more, and went on his way rejoicing. 40 But Philip was found at Azo'tus, and passing on he preached the gospel to all the towns till he came to Caesare'a.
Posted by ABOUT THE ARTIST: DAVID MYERS at 4:31 PM