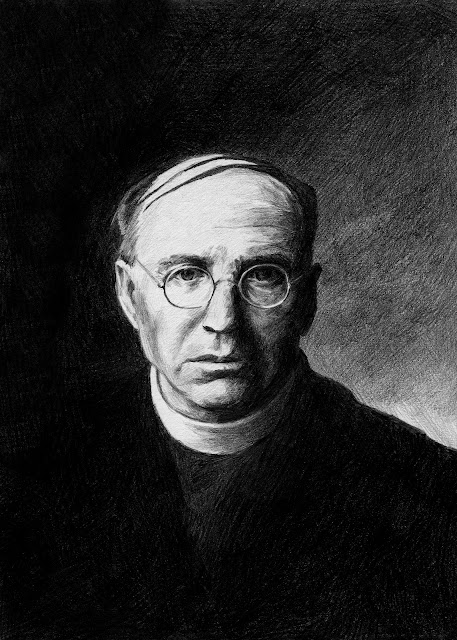 This portrait of Father Thomas Frederick Price, "The Tarheel Apostle," is my 5th portrait of this servant of God. The photo I rendered this from was shared with me by Father Michael Walsh, MM, who is involved in efforts to have him recognized as a Saint in the Catholic Church. The photo was the last known photo taken of Father Price, and was for a travel document he needed during his missionary work in China.

Father Price's cause for Beatification and Canonization is now underway in its "Diocesan" stage here in the Diocese of Raleigh. North Carolina is where Father Price grew up, was ordained, and where he spent the first stages of his remarkable priestly life. If Father Price's achievements were limited to his time in his home state, they would be sufficient to mark him as a Priest of singular, heroic virtue. He was a dynamo of charitable and apostolic work, and deeply loved the people of North Carolina, Catholic and non-Catholics alike. It was his love for his home and her people that so charmed the men and women of the Old North State. I believe that his work here, especially his evangelical spirit and his charity, should be more widely known by the people of our Diocese, and I hope that his cause will achieve this if nothing else. His life still inspires and speaks to the missionary nature of the Church in North Carolina. Indeed, I believe that his labors here testify to his Sainthood, just as his later achievements would on a global scale.

Here is a Saintly Priest worth knowing and befriending. I hope that you will consider ordering his biography, "The Tarheel Apostle" which is available in reprint from Amazon. If you are from the State of North Carolina, or if you have spent any time here, you will be charmed by the familiar places and history recounted in its pages. You will especially be charmed by the simplicity of this man, who had little regard for his clothes, his appearance, or the limitations that keep most people from achieving great things. He loved all, especially those who misunderstood and persecuted him, and he patiently, persistently, and irresistibly convinced them of his goodness, and also of the love he carried for the people of North Carolina. My prayer is that all of us will come to know him better as his cause proceeds here in our local Church.
Posted by ABOUT THE ARTIST: DAVID MYERS at 6:45 AM