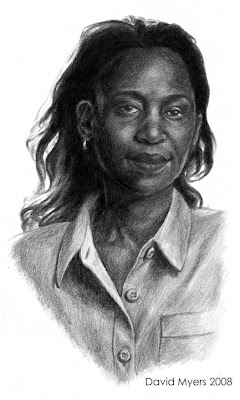 This drawing is the latest in a series of portraits I am completing of the keynote speakers who will be presenting at the Ignited by Truth Catholic Conference in Raleigh this February. This drawing, I can safely say, is of a beautiful survivor of an abhorrent atrocity. It is also a portrait of a hero of forgiveness.

Immaculee Ilibagiza is a survivor of the Rwandan genocide. She and several other women were saved by a Protestant pastor who hid the girls in a small bathroom that they shared for four months. Immaculee's father and mother, friends, and many other family members were all killed. When hidden in the cramped little bathroom, she kept her sanity, her hope, and her faith by praying the Rosary over and over again, meditating on the life of Christ and of his Mother Mary. One day a man came with a group of thugs looking for more members of Immaculee's tribe. This happened often, but somehow the bathroom was always overlooked. The man who came that day explained (in earshot of the hidden women) that he was looking for Immaculee Ilibagiza, and had killed 399 people and his intention was that she should be number 400. Immaculee recognized the voice. It was a young man she had gone to primary school with growing up. Can any of us imagine the evil that she and her fellow survivors witnessed, endured, and still endure?

Immaculee chose in the course of her ordeal, amid thoughts of hatred and anger and vengeance, (naturally given the unspeakable trauma she was experiencing) that she would forgive those who killed her family and her friends. She found the grace to do this in her continual prayers, especially her meditations on the suffering of Christ and His Mother when the Savior was crucified. She says that she thought of how Mary and Jesus responded during the atrocity that was perpetrated on Christ himself : "Father Forgive them, for they know not what they do." She knew that the men killing her family and friends could not have a full awareness of the depth of evil they had given themselves over to. In fact, she faced her family's killer in prison, and told him to his face that she forgave him. She stated that when she saw him, he seemed "so confused" and misled. Compassion for a serial killer? Coming from the heart of a victim of his crimes? Truly she is a glowing witness to the Forgiveness of God.

I hope that you will watch this short clip featuring testimony from Immaculee herself:

Posted by ABOUT THE ARTIST: DAVID MYERS at 8:54 PM