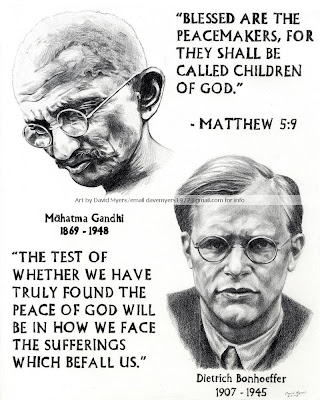 The completed work above was commissioned by a friend that I work with, and it pays tribute to the high esteem that Diettrich Bonhoeffer had for Gandhi, especially his movement of non-violent resistance. It is interesting to note that Bonhoeffer apparently wanted to travel to India and study with Gandhi in person. There is a debate over whether or not Bonhoeffer would have held to a completely pacifist resistance against the Nazis had he not been prevented from taking this journey. Bonhoeffer was a member of the German resistance movement and took part in a failed plot to assassinate Hitler later during the War. It is a debate that we will always have, I think - is there such a thing as a "Just War," particularly in the Light of Christ? Follow this link to read the Catholic understanding. Below I have included two quotes, one from Martin Luther King Jr on Gandhi and Bonhoeffer, and the second an excerpt from a letter Bonhoeffer wrote regarding his desire to study with Gandhi. I have thoroughly enjoyed this project.

"If your opponent has a conscience, then follow Gandhi and nonviolence. But if your enemy has no conscience like Hitler, then follow Bonhoeffer." - Rev. Martin Luther King, Jr.

"[N]ow the time has come when the Sermon on the Mount must be brought to mind again…Incidentally I plan to go to India very soon to see what Gandhi knows about these things and to see what is to be learned there." - Excerpt from a letter written by Bonhoeffer, 1934

Posted by ABOUT THE ARTIST: DAVID MYERS at 6:45 AM