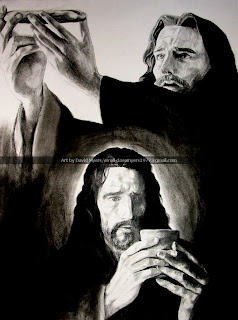 "Brothers and sisters:I received from the Lord what I also handed on to you,that the Lord Jesus, on the night he was handed over,took bread, and, after he had given thanks,broke it and said, “This is my body that is for you.Do this in remembrance of me.”In the same way also the cup, after supper, saying, “This cup is the new covenant in my blood.Do this, as often as you drink it, in remembrance of me.” For as often as you eat this bread and drink the cup,you proclaim the death of the Lord until he comes." - 1 Corinthians 11:23-26 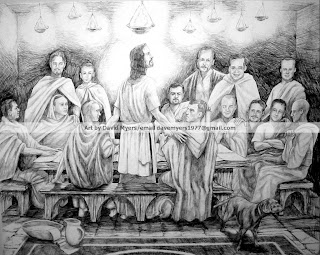 "Before the feast of Passover, Jesus knew that his hour had come to pass from this world to the Father.He loved his own in the world and he loved them to the end.The devil had already induced Judas, son of Simon the Iscariot, to hand him over. So, during supper, fully aware that the Father had put everything into his powerand that he had come from God and was returning to God, he rose from supper and took off his outer garments. He took a towel and tied it around his waist.Then he poured water into a basinand began to wash the disciples’ feetand dry them with the towel around his waist.He came to Simon Peter, who said to him, “Master, are you going to wash my feet?”Jesus answered and said to him, “What I am doing, you do not understand now,but you will understand later.” Peter said to him, “You will never wash my feet.” Jesus answered him, “Unless I wash you, you will have no inheritance with me.” Simon Peter said to him, “Master, then not only my feet, but my hands and head as well.” Jesus said to him, “Whoever has bathed has no need except to have his feet washed,for he is clean all over;so you are clean, but not all.” For he knew who would betray him;for this reason, he said, “Not all of you are clean.” So when he had washed their feetand put his garments back on and reclined at table again,he said to them, “Do you realize what I have done for you?You call me ‘teacher’ and ‘master,’ and rightly so, for indeed I am.If I, therefore, the master and teacher, have washed your feet, you ought to wash one another’s feet.I have given you a model to follow,so that as I have done for you, you should also do.”
- John 13:1-15

Posted by ABOUT THE ARTIST: DAVID MYERS at 5:25 AM