RAISING OF THE FLAG AT IWO JIMA (completed on September 11th, 2007) 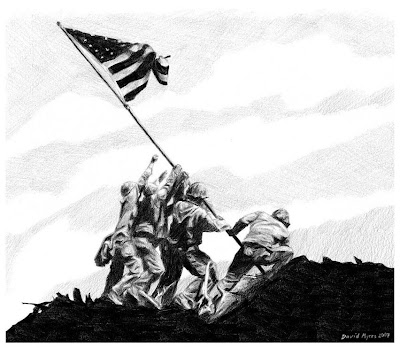 Two dear friends of my wife and I celebrated the birth of their firstborn son this past weekend. The husband teaches and coaches basketball at a local school in Richlands, NC, and his wife is a dentist in the Navy, serving the Marines at Camp Lejeune in Jacksonville, NC. The grandfather of the newborn is an officer in the Marine Corp, and thanks to he and his wife, Emily and I were able to stay in officers quarters at Camp Legeune while visiting the family. We are very appreciative for their hospitality. We are even more thankful for the service that each of them, both as officers and supporting family, give to us as citizens every day.

I had never had the opportunity to be at a military base, and the experience moved me deeply. I have always admired the character, discipline, and structure of the Marine Corp and the virtues it personifies. I drew this copy of the raising of the flag at the battle of Iwo Jima (possibly the most widely viewed photograph of all time) as a thank you to the new grandfather's family for their hospitality. As you probably know, five of the soldiers that were photographed raising our flag were Marines, and the image has been immortalized in the Marine Corp memorial at Arlington National Cemetery.

For me, on this day when we remember those who lost their lives on September 11th, and those who vowed to defend us in the face of terror, it is fitting to complete this drawing. It is truly wonderful when an image so moves and inspires us. May the just cause ever rise in victory over the wreckage of aggression and terror.

"The raising of that flag on Suribachi means a Marine Corps for the next five hundred years."

"Some people spend an entire lifetime wondering if they made a difference in the world. But, the Marines don't have that problem."

-Ronald Reagan, President of the United States; 1985
Posted by ABOUT THE ARTIST: DAVID MYERS at 4:16 PM