THE GLORY OF THE MASS : A WORK IN PROGRESS FOR A RECENTLY ORDAINED FRIEND, A FITTING SUBJECT FOR THE YEAR OF THE PRIEST 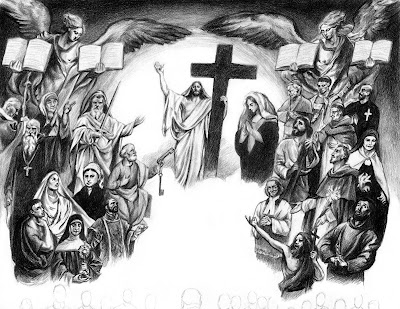 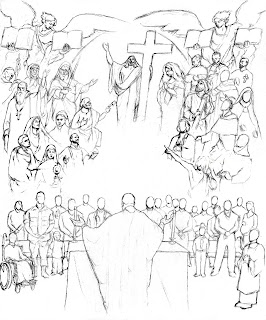 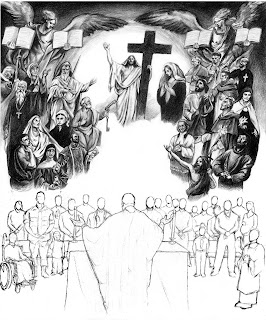 This is a pretty ambitious project that I am working on for a friend who was recently ordained. He commissioned it some time ago and I confess that I had been avoiding it because I knew it was going to be difficult to do well. This album is a thank you to him for his patience, and to let him know that he doesn't have to despair of this project getting underway.

The image is meant to be an exposition of the experience of the Priest and the very great responsibility that is his to minister to all of God's Children, facilitating their lives in Christ through the Ancient Tradition and Faith of the Church. The Priest does this especially by first cultivating a profound friendship with Christ, especially through personal prayer and frequenting of the Scriptures. He learns from the great saints who have gone before us in faith, many of whom he has developed a special veneration for. They are literally his heroes, and the example and experience of their faith informs his own. He speaks to them and asks for their prayers, as he reads their writings and the stories of their lives. He communicates the insights he gains from his own prayer, the Gospels, and the tradition of the Church to the People of God.

The Saints have been especially important to my recently ordained friend, and they have enriched his life greatly. He has also obviously been enriched by his varied experiences of ministry to many different groups and individuals during the course of his formation. He wanted the image to include an image of a Priest offering Mass to a congregation made up of several different types of persons, many of whom he reverences (such as law enforcement or firemen) or has learned from in a special way during the course of his formation in the Priesthood. In the upper portion of the drawing is a small "who's who" of saints, many specifically requested by my friend, who has learned from each of these great men and women of the Church.
The Communion of Saints is complete! I will have more updates soon.
Posted by ABOUT THE ARTIST: DAVID MYERS at 7:32 PM

Email ThisBlogThis!Share to TwitterShare to FacebookShare to Pinterest
Labels: Catholic Priesthood, Christian Art, Communion of Saints, Glory of the Mass, Holy Mass, Image for the Year of the Priest, Sacrifice of the Mass, saints